The number of boys born in Hong Kong is soaring compared with girls, spurred by an influx of mainland mothers who prefer sons. Many use sex-selection services that are illegal across the border.

At this rate it may soon approach the 120 to 130 found in some provinces on the mainland.

The trend is backed up by the first comprehensive study of its kind in Hong Kong. The researchers noted that many mothers came to Hong Kong specifically to learn the sex of their babies. Some would cancel their birth bookings on finding that they were expecting girls.

Since a landmark Court of Final Appeal ruling in 2001 gave permanent resident status to children born in Hong Kong to mainland parents, the city has become a “birth hub”.

These Hong Kong-born children may not be raised in the city during their early childhood, but they can come here at any time to enjoy their full rights to education and social services. In 2008, mainland mothers accounted for 42.6 per cent of all births in Hong Kong.

The study by three obstetricians and gynaecologists at hospitals in Kowloon West – Grace Wong Ying, Leung Wing-cheong and Robert chin kien-howe – was published recently in the Journal of Perinatal Medicine.

Wong, the study’s chief author, said the rapid rise in the ratio was a result of and influx of mainlanders who practiced sex selection more than locals.

The researchers said as most mainland women giving birth in Hong Kong came from southern China, biological or environmental reasons alone probably could not explain such a “skewed” sex ratio.

“The most plausible explanation for this is the practice of sex selection. However, these findings do not provide direct evidence that such a high sex ratio is a result of selective abortion of females in women of higher birth order,” the report said.

“It is also possible that patients from mainland China tend to spend more resources on their sons, and are more willing to give birth in Hong Kong if their pregnancy is of a male baby.”

Wong, who formerly worked at the public Princess Margaret Hospital and switched to private practice a year ago, said almost 90 per cent of her patients were from the mainland.

“We have come across several cases in which the mainland mothers have defaulted or cancelled their booking for a delivery in Hong Kong after learning that they are carrying a girl. Some even disappeared without paying the medical fee after an ultrasound scan,' Wong said. The team also analysed the sex ratio of each birth order. They found that while mainland women did not have a clear preference for a son in their first pregnancy, they may have practised some form of sex selection from their second pregnancy. For Hong Kong women, the sex ratios were 106 to 100 for the first baby, 107.3 for the second and 118.4 for the third child or above. The ratio increases much more steeply among mainland women - from 104.7 for a first baby, 114.9 for the second and 174.5 for the third child or above. The researchers warned that the 'abnormally skewed' sex ratio may have disastrous social consequences. 'High sex ratios at birth have deprived female fetuses of their birth rights. Mothers also suffer from tremendous psychological pressure and reproductive health risks while undergoing abortion. 'Discrimination against women is detrimental for both men and women, hindering the overall economic development. The phenomenon of missing girls will lead to a shortage of marriageable females,' the team said. There are now more women than men among the Hong Kong population aged 20 to 35. But University of Hong Kong demographer Dr Paul Yip Siu-fai said the changing sex ratio at birth would only have a limited effect on the overall sex ratio. 'This is because many Hong Kong men will marry mainland women and bring them to Hong Kong, and women's life expectancy is longer.' He called on the government to monitor demographic trends and prepare for an influx of Hong Kong-born children from the mainland.

Children born in Hong Kong enjoy full residency status In 2008, mainland mothers accounted for the following proportion of births in the city: 42.6% 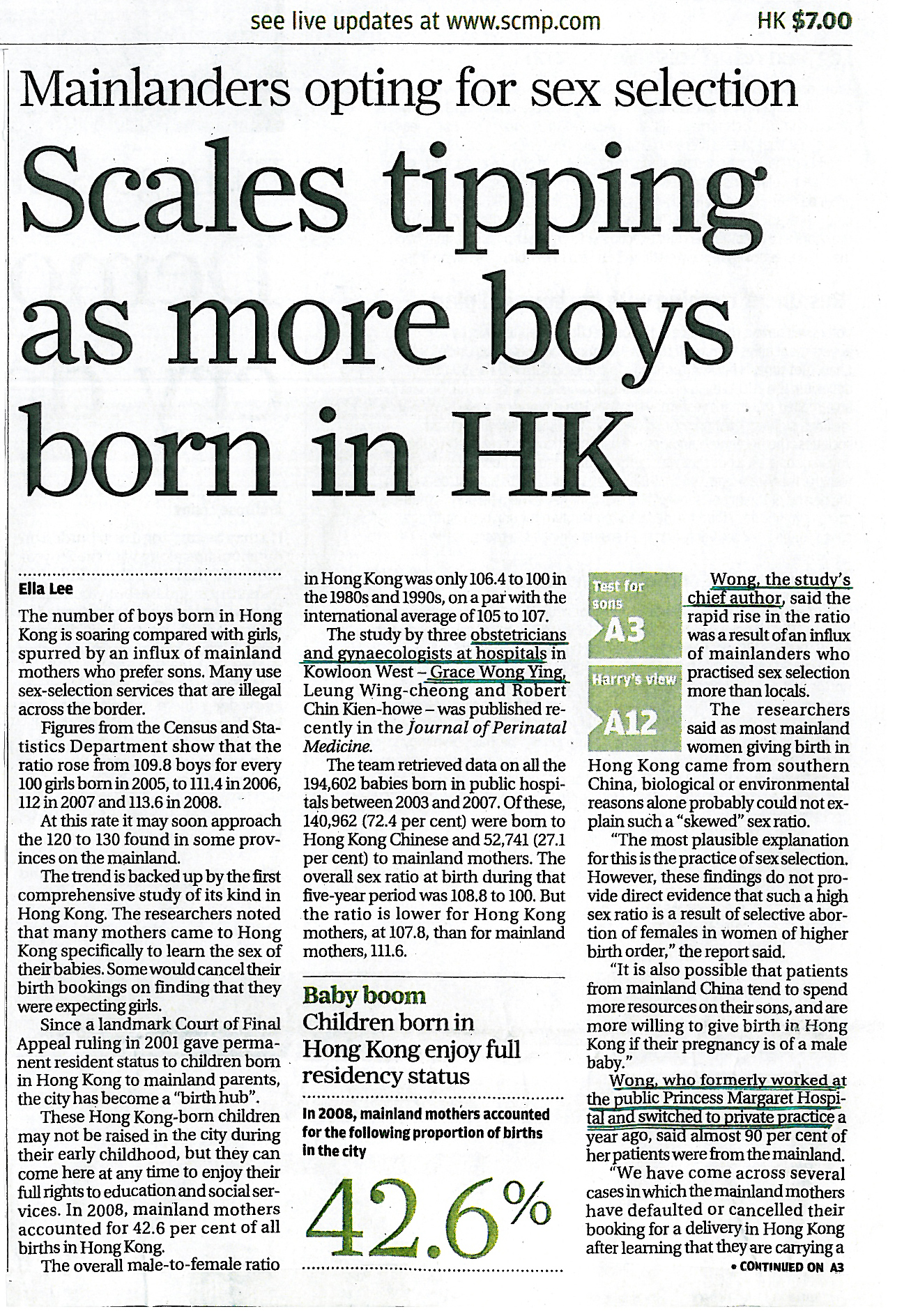