A Hong Kong biotechnology laboratory has been banned by private hospitals amid fears that mainland mums-to-be are using its services for unethical sex selection. Doctors believe that some women are abusing a genetic test offered by DiagCor Bioscience which can identify the sex of a baby and its chances of developing a severe sex-linked genetic disorder. Parents who have a family history of a severe genetic disorder use this test to determine the chances of the fetus developing a severe genetic disease.

DiagCor in Kowloon Bay is the only laboratory to offer the test, which isolates fetal genes in the mother's blood. The abortion of female fetuses is notorious in the mainland under the one-child policy. Hong Kong has become a destination for fetal sexing because mainland doctors may not disclose such information.

This issue has come to light days after Hong Kong set quotas for deliveries for mainland mothers next year - capped at 34,400, of which 31,000 will be at private hospitals and 3,400 at public hospitals. The government announced the quotas to ease pressure on services and allay fears among Hong Kong mothers-to-be that they will not get a bed.

DiagCor's test can be done as early as in the eighth week of pregnancy, compared with about 15 to 16 weeks for an ultrasound scan, doctors say.

Although the test can determine the sex of a fetus, DiagCor says it has never been promoted as a tool for selection.

In Hong Kong, it is illegal to choose the sex of a child for non-medical reasons in assisted human reproduction treatment. But there is no law prohibiting fetal sexing.

At least four major private hospitals - Baptist Hospital, Union Hospital, St Paul's Hospital and the Hong Kong Sanatorium and Hospital - have banned the test, which is still available at a cost of a few thousand dollars through private practitioners. Doctors said the laboratory reports had recently been made available in Chinese, making them more popular with mainland parents.

Private obstetrician Dr Grace Wong Ying said she encountered at least one to two mainland mothers each month who specifically requested the test.

'Although I told them I won't refer them to the laboratory, some of them found a way to get the test done and came back with a report. Some are reluctant to pay a deposit for a maternity package before they know the fetus is a boy or girl,' Wong said. 'The test's original purpose is for parents to check if the baby may suffer from severe sex-linked genetic diseases so they can have some prenatal counselling or an abortion, but doctors worry that the test is being used for gender selection including abortion,' she said.

Wong's earlier study, reported by the Post last year, found that the number of boys born in Hong Kong is soaring compared with girls, spurred by an influx of mainland mothers who prefer sons.

Wong said she would say it was unethical for doctors to refer patients for the test without knowing the real intentions behind it.

'Doctors won't know if the patient may use the result for the decision of abortion. Some parents may want to have better planning before the delivery, such as buying clothes for girls or boys,' she said.

Deputy medical director of the Union Hospital Doctor said the hospital's resident obstetricians 'have reached a consensus' not to use the test because the worry of it 'being abused for gender selection'.

'The test is different from ultrasound scans because it can tell the fetal sex in the first trimester [of pregnancy] while the ultrasound can only detect it in the second trimester. At the later stage of pregnancy, it is always easier for doctors to warn against an abortion because it would be more painful and risky to the mother.' .

St Paul's Hospital administration discussed the test after requests from some mothers, but decided to ban it after DiagCor failed to provide scientific proof of its accuracy rate.

A sales and marketing manager at Diagcor, said the laboratory test was the first part of a paternity test. She said the test, which examines fetal genes contained in the mother's blood, can reveal whether the baby's Y-chromosome matches the father's.

If the baby is a girl, the doctor then takes a sample of amniotic fluid for testing for further matching with the father's genes. Fluid in the amniotic sac surrounding the fetus also contains fetal DNA.

She declined to provide the total number of requests for the test, would say only that demand is 'growing fast' among mainland mothers giving birth in Hong Kong. She said how the test results were used was an issue of medical practice and a patient's choice.

'We have never promoted the test for fetal sexing, but some mothers need the paternity test results for immigration applications and other purposes ... other tests such as ultrasounds and samples of the amniotic fluid can also tell the sex of a fetus,' she said.

The women, who are both due to give birth in November, were arrested after they tried to make appointments at the Princess Margaret Hospital last month.

They were refused bail, and the case was adjourned until August 12. 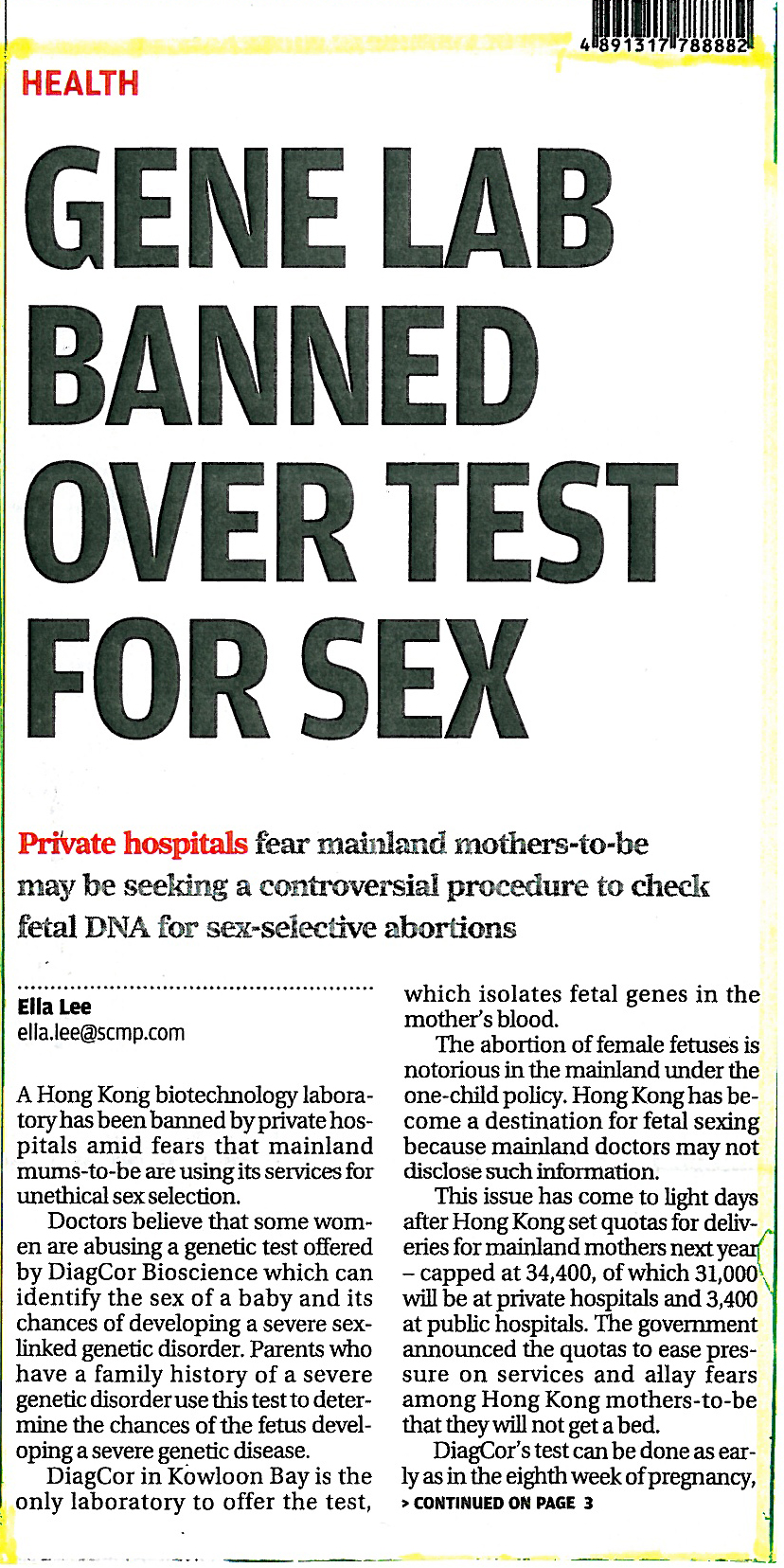